I just received word from Gaël, a friend and fellow member of the CAF French Wing that the French Skyraider (F-AZDP) collided with P-51 “Big Beautiful Doll” at the Duxford Flying Legends airshow.  Rob Davies, BBD’s pilot, bailed out while the Skyraider was able to land, minus several feet of right wingtip. Fortunately, no casualties have been reported (aside from the aircraft).

From what can be seen on the videos and descriptions of witnesses, BBD was leading a Vic formation as part of the airshow’s final “Balboa”. BBD broke off, followed a few seconds later by the Skyraider. The Skyraider caught up with BBD, its right wing impacting the lower rear fuselage of the Mustang. The Skyraider lost its right wingtip and went into a roll (probably due to the difference in lift between the two wings) before its pilot regained control and brought it back to a safe landing.

BBD was not so fortunate and Rob Davies quickly jettisoned the canopy, and exited the aircraft only a few hundred feet off the ground. BBD fell in a field and was destroyed. Rob Davies appears to have been uninjured by his ordeal, but was taken to the hospital out of precaution.

Thanks to Chris Sandham-Bailey for sharing these pictures of F-AZDP: 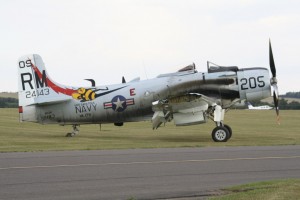 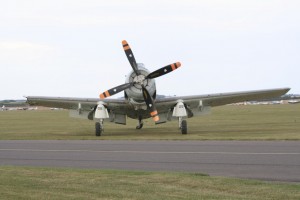 Luckily, the wingtip was torn away but the aileron remained on the airframe. Some very impressive shots of the Skyraider’s landing are also visible here. 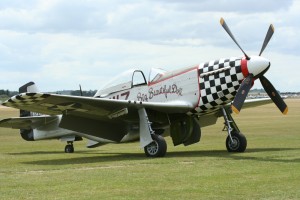 A video posted on Youtube by MrJonlar shows the collision (best watched watch in hi-res):