A private F-5 Tiger for Switzerland?

P-47G SNAFU to arrive in the US 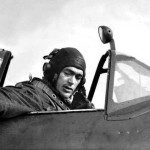 Squadron Leader Tony Gaze, who died on 29 July 2013 at the age of 93, was a Second World War Spitfire fighter ace and later became a highly successful motor racing driver.  Born on 3 February 1920, he was credited with 12.5 aerial victories during the Second World War and flew jets and gliders after the war, in addition to his racing career.

Read his obituary on The Telegraph.