That is what James Cutler, a British historian, claims to have discovered. For years, it was presumed that Gibson had run out of fuel or crashed while flying at low altitude. On the night he was killed, he was flying a de Havilland Mosquito, acting as a pathfinder for heavy bombers raiding Germany. The date was September 19, 1944.

According to Cutler, Gibson would have appeared behind a Lancaster whose rear gunner, Sgt Bernard McCormack, mistook the Mosquito for a German Junkers Ju 88 night fighter. McCormack instinctively fired 600 rounds into their pursuer, which exploded in mid-air over the Netherlands. Upon their return, McCormack and his crew claimed a Ju 88 shot down. After several enquiries by intelligence officers, McCormack realized that he had not shot down a German night-fighter but Bomber Command’s 26-year old legend Guy Gibson, VC.

McCormack, overwhelmed with guilt, never told anyone of the incident but recorded his confessions on a tape which he gave to his wife Eunice before his death in 1992. Eunice handed over the tape to Cutler, who also claims to have uncovered classified Bomber Command documents confirming the incident.

But why would Gibson, often considered as the most experienced bomber pilot in the RAF in World War II, have followed a heavy bomber? He was certainly aware of the risks of confusion, especially at night. One possibility is that Gibson and his navigator had lost their navigation equipment and made the ultimately fatal decision of following a “heavy” back to England. 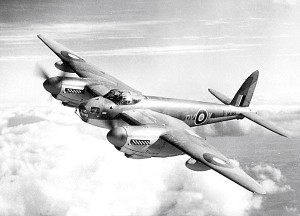 Mosquito (above) or Junkers (below)? At night and in combat conditions, rapidly distinguishing the two was no easy task. 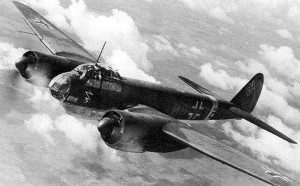 Permanent link to this article: https://www.worldwarbirdnews.com/2011/10/12/was-guy-gibson-killed-by-friendly-fire/