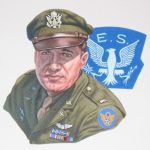 The American ace of Greek origin Spiros Pisanos, known as “Steve” or the “Flying Greek”, passed away on June 6, aged 96. He was credited with 10 confirmed aerial victories during World War II and received 33 decorations and distinctions during his career as a fighter pilot, which lasted until 1974.

Born in Greece in 1919, Pisanos got hired as a sailor in 1938 and seized the first opportunity he had to illegally enter the United States. He started working there, changing his name to Steve and was eventually admitted as an immigrant worker in the US. After Germany invaded Greece in 1940, he tried joining the US Army Air Force but was refused due to his lack of American citizenship. He was able to join the Royal Air Force, and trained in Canada and later in the UK, joining No 71 Squadron, one of the American-staffed “Eagle Squadrons” flying the Spitfire.

When the US entered World War II, Pisanos was again denied integration into an American unit but eventually in convincing the US government to grant him citizenship under the name of Steve Pisanos on May 3, 1942. He then joined the 4th Fighter Group, flying the Spitfire and later the P-47 and P-51.

On May 5, 1944, during an escort mission over France, Pisanos had to belly-land after his P-51 Mustang’s engine lost power. He was rescued by the French Resistance, and helped them collect intelligence and attack German occupation troops until the liberation of Paris.

After his return to the USA, he briefly worked as an airliner pilot before returning to the Air Force and becoming a test pilot. In 2010, Pisanos received the French Legion of Honor from the French Consul General.