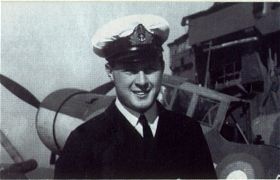 John “Jock” Moffat, the Swordfish pilot who crippled the German battleship Bismarck on 26 May 1941, has died at the age of 97. On the day of the attack, it is believed that Moffat and his crew were able to launch a torpedo that struck and jammed Bismarck’s rudder, preventing it from escaping from the Royal Navy task force pursuing it. It was scuttled the following day by its crew while under attack by Royal Navy ships.

“Jock” Moffat, who was born in 1919, returned to civilian life after the war but always kept an interest in aviation and started flying again in his 60s.