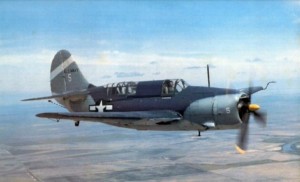 Divers from Jupiter, Florida, have discovered the wreck of a Curtiss SB2C Helldiver lying on its back at a depth of 185 ft. The aircraft seems to be in good shape. Its exact identity is unknown. Source.

Permanent link to this article: https://www.worldwarbirdnews.com/2012/01/03/curtiss-sb2c-helldiver-discovered-off-florida-coast/