Tracey Curtis-Taylor on the footsteps of Amy Johnson 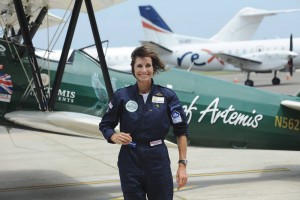 On January 9, 2016, british pilot Tracey Curtis-Taylor landed in Sydney, Australia, in her 1942 Stearman “Spirit of Artemis”. The 53 year-old pilot had flown 21,000 km in 50 legs since her departure from Farnborough in the UK in October 2015, replicating Amy Johnson’s 1930 flight when she became the first women to fly solo …

END_OF_DOCUMENT_TOKEN_TO_BE_REPLACED

Permanent link to this article: https://www.worldwarbirdnews.com/2016/01/11/tracey-curtis-taylor-on-the-footsteps-of-amy-johnson/