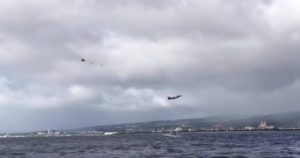 Hawker Hunter N323AX, operated by ATAC (Airborne Tactical Advantage Company) crashed into the sea off Honolulu on 13 December 2018. Its pilot ejected before the crash but was seriously injured. Available reports indicate his injuries are not life-threatening and that he is recovering. The pilot was acting as a civilian contractor taking part in the Sentry Aloha exercise.

Permanent link to this article: https://www.worldwarbirdnews.com/2018/12/15/pilot-injured-in-hawker-hunter-ejection-off-honolulu/