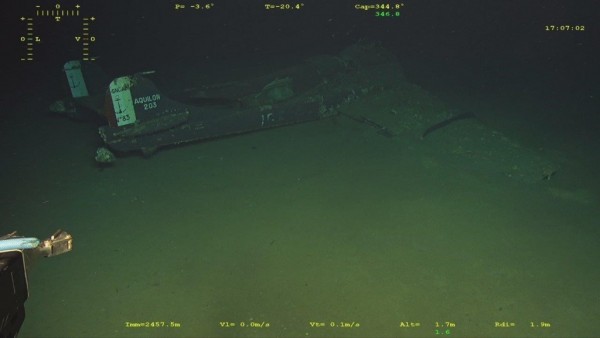 On November 20, 2020, the Pourquoi Pas ? , a ship of the French oceanographic fleetoperated by the Ifremerand the French navy was conducting scientific work south of Porquerolles in southern France, when its remotely-controlled Victor6000 robot discovered the wreck of an Aquilon fighter, a French-built de Havilland Sea Venom, nearly 8,000 ft beneath the surface.

The markings on the tail revealed the history of the aircraft and its pilot. The accident happened on 13 June 1960 as Aquilon 203 n°83 of Flottille 11F was in the last stages of its carrier qualifications on the British carrier HMS Ark Royal sailing off Hyères. During the final launch before returning to its base in Hyères, Aquilon n°83 hit the water and sank immediately. Its pilot, 27-year-old Maître Jean LEGOUHY, disappeared with his aircraft.

The Aquilon was the French navy’s first operational jet fighter. Built starting in 1952 by the Société Nationale de Construction Aéronautiques du Sud-Est (SNCASE) in Marignane, it was built in several versions and served from 1955 to 1966. The type served as a transition and an initiation to jet-powered aircraft, replacing the Hellcat and serving alongside the Corsair, which was used for ground attack until 1964. The final flight ig the Aquilon in the French naval air arm took place on 30 June 1966.

Permanent link to this article: https://www.worldwarbirdnews.com/2020/11/28/sncase-aquilon-wreck-discovered-in-mediterranean-sea/