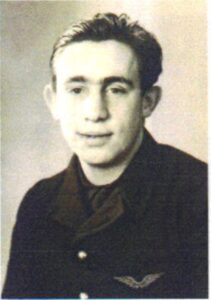 Sergent-chef René Billotet, born on 18 April 1925 in Dôle (France) and last survivor of the Royal Air Force’s No 342 (Free French) Squadron passed away at his home aged 95.

Better known in France as the Groupe de Bombardement Lorraine, the squadron played an essential and unusual role during the D-Day landings. On the morning of 6 June 1944, six of the squadron’s aircraft were deployed to lay smoke screens between German coastal defences and the advancing Allied ships.

It was a particularly dangerous mission, as the aircraft had to fly a low, fast and predictable course very close to enemy defenses, making new passes regularly to maintain the smoke screens. One of the aircraft didn’t return to base : Boston BZ213 crashed into the sea during the mission, killing its crew of three.

René Billotet was not selected to fly this mission but contributed to it by installing the smoke generators on the squadron’s Boston bombers during the previous night.

At the young age of 17, he had joined the French Resistance after Germany invaded the southern part of France on 11 November 1942. In June 1943 he managed to cross the Channel and joined the Free French Air Force where he was assigned to No 342 Squadron. He flew about ten wartime missions as an engineer.

After the war’s end, he continued serving in the French air force until 1963 and was always very active, visiting the Lyon-Mont Verdun airbase on a regular basis.

Our thoughts and prayers go to the family and friends of sergent-chef René Billotet.

Permanent link to this article: https://www.worldwarbirdnews.com/2020/11/21/rene-billotet-last-survivor-of-no-342-free-french-squadron-has-passed-away/