The P-51C “Tuskegee Airmen” operated by the CAF Red Tail Squadron was damaged eight months ago in a landing accident in Dallas, TX. The aircraft was taken to AirCorps Aviation for repairs and flew again on December 1st with Doug Rozendaal at the controls.Rozeendaal reported that “there were no issues with the test flight and …

END_OF_DOCUMENT_TOKEN_TO_BE_REPLACED

Permanent link to this article: https://www.worldwarbirdnews.com/2016/12/04/tuskegee-airmen-p-51c-flies-again/ 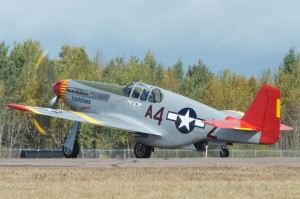 The P-51C Mustang “Tuskegee Airmen” of the Commemorative Air Force’s Red Tail Squadron was damaged in a wheels-up landing yesterday in Dallas. Pilot and Unit Leader Bill Shepard walked away from the accident unhurt. The restaured aircraft made its first flight in 2001 and was used to honour the memory of the Tuskegee airmen. In …

END_OF_DOCUMENT_TOKEN_TO_BE_REPLACED

Permanent link to this article: https://www.worldwarbirdnews.com/2016/02/04/p-51c-mustang-tuskegee-airmen-damaged-in-wheels-up-landing/