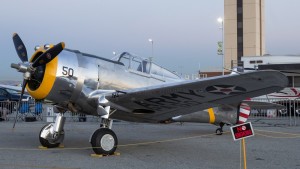 Curtiss P-36 Hawk s/n 38-210 N80FR of The Fighter Collection flew again a few days again and made its first public appearance at the Planes of Fame Airshow 2015. It is now headed for Europe and will be presented at Duxford’s Flying Legends airshow in a few weeks. This is one of only two airworthy …

END_OF_DOCUMENT_TOKEN_TO_BE_REPLACED

Permanent link to this article: https://www.worldwarbirdnews.com/2015/05/09/world-second-airworthy-curtiss-hawk-flies-again/

On June 16, Mosquito B.35 VR796 (CF-HML) made its first flight from Victoria airport in Canada following a very long restoration. The aircraft, which had not flown in 48 years, was piloted by Steve Hinton. There are only two airworthy Mosquito in the world currently, the other one being Jerry Yagen’s Mosquito FB.26 KA114 which …

END_OF_DOCUMENT_TOKEN_TO_BE_REPLACED

Permanent link to this article: https://www.worldwarbirdnews.com/2014/06/19/de-havilland-mosquito-flies-in-canada/

Flying Heritage Collection test flew their newly restored Grumman F6F-5N for the very first time on Wednesday, March 27th, 2013 with Steve Hinton at the controls. The Hellcat is their latest addition to the collection and will be flying for the 2013 season here at Paine Field in Everett, Washington. Source: fight2flyphoto on YouTube

Permanent link to this article: https://www.worldwarbirdnews.com/2013/03/28/flying-heritage-collection-f6f-hellcat-first-flight/

Video: First flight of the IL-2M3 Shturmovik in the US

The sole airworthy IL-2 Shturmovik in the world, which is part of Paul Allen’s Flying Heritage Collection, made its maiden flight since its arrival in the United States. The pilot for the flight was Steve Hinton. Video by Jason R. Fortenbacher.

Permanent link to this article: https://www.worldwarbirdnews.com/2012/08/10/video-first-flight-of-the-il-2m3-shturmovik-in-the-us/