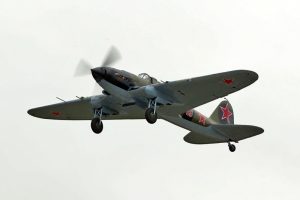 On Friday the 16th of June, an Ilyushin Il-2 Shturmovik made its maiden flight in Novossibirsk, Russia. Only two Il-2 are currently airworthy, the first one being part of Paul Allen’s Flying Heritage & Combat Armor Museum. This aircraft was shot down in November 1943 and landed on a frozen lake near Murmansk, from which it …

END_OF_DOCUMENT_TOKEN_TO_BE_REPLACED

Permanent link to this article: https://www.worldwarbirdnews.com/2017/06/20/another-ilyushin-il-2-shturmovik-flies-in-russia/

Video: First flight of the IL-2M3 Shturmovik in the US

The sole airworthy IL-2 Shturmovik in the world, which is part of Paul Allen’s Flying Heritage Collection, made its maiden flight since its arrival in the United States. The pilot for the flight was Steve Hinton. Video by Jason R. Fortenbacher.

Permanent link to this article: https://www.worldwarbirdnews.com/2012/08/10/video-first-flight-of-the-il-2m3-shturmovik-in-the-us/

An Il-2 Shturmovik was raised from a lake in Russia recently. The aircraft made an emergency landing on the frozen lake on November 25, 1943. The crew of two was able to leave the aircraft but it subsequently fell through the ice and sank to the bottom of the lake. According to this article from …

END_OF_DOCUMENT_TOKEN_TO_BE_REPLACED

Permanent link to this article: https://www.worldwarbirdnews.com/2012/06/24/il-2-sturmovik-raised-from-lake-in-russia/

Il-2 Shturmovik takes to the skies in Russia

Updated Oct 12, 2011 After a little-known restoration program by Aviarestoration, an Il-2 Shturmovik recently took to the skies in Russia. While over 35,000 Il-2 were built, there are few survivors, and until recently, no flying example of this legendary attack aircraft.

END_OF_DOCUMENT_TOKEN_TO_BE_REPLACED

Permanent link to this article: https://www.worldwarbirdnews.com/2011/10/10/il-2-shturmovik-takes-to-the-skies-in-russia/