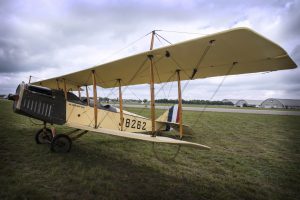 The Friends of Jenny’s Curtiss JN-4 Jenny replica crash-landed in a golf course on August 12 near Bowling Green-Warren County Regional Airport in Kentucky. Fortunately, pilot Terry Richardson was reportedly only lightly injured, suffering a light head wound. The aircraft is a replica built in 2012 using original plans, but is powered by a GMC V8 …

END_OF_DOCUMENT_TOKEN_TO_BE_REPLACED

Permanent link to this article: https://www.worldwarbirdnews.com/2017/08/16/friends-of-jennys-curtiss-jenny-crash-lands-in-kentucky/

On May 24, Blue Swallow Aircraft made its first engine run on a 1918 Curtiss JN-4 “Jenny” powered by an original Custiss OX-5 V8 engine. The aircraft has been under restoration since May 2013. Source: Early Aero

Permanent link to this article: https://www.worldwarbirdnews.com/2016/05/28/us-first-engine-run-for-blue-swallow-aircrafts-1918-curtiss-jenny/