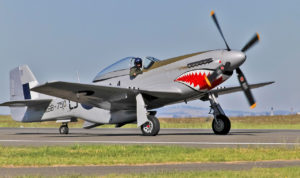 The North American Mustang Mk 23 “Duffy’s Delight” (serial A68-170, registered VH-SVU) of the Royal Australian Air Force Museum recently made its first engine runs since the engine was returned from overhaul. The aircraft was fully restored in the nineties and made its first post-restoration flight on 17 February 1999. In 2012, the aircraft was …

END_OF_DOCUMENT_TOKEN_TO_BE_REPLACED

Permanent link to this article: https://www.worldwarbirdnews.com/2019/02/05/engine-runs-for-raaf-museum-mustang-duffys-delight/

On May 24, Blue Swallow Aircraft made its first engine run on a 1918 Curtiss JN-4 “Jenny” powered by an original Custiss OX-5 V8 engine. The aircraft has been under restoration since May 2013. Source: Early Aero

Permanent link to this article: https://www.worldwarbirdnews.com/2016/05/28/us-first-engine-run-for-blue-swallow-aircrafts-1918-curtiss-jenny/

Permanent link to this article: https://www.worldwarbirdnews.com/2013/10/03/memorial-flight-lvg-cvi-first-engine-runs/

The de Havilland Mosquito FB.26 KA114 under restoration by Avspecs Ltd made its first engine run today. The company, based in Auckland, New Zealand, is restoring the aircraft to airworthiness for its owner, Jerry Yagen. The restoration of the Mosquito being a lengthy process, the first flight of KA114 has been postponed several times but …

END_OF_DOCUMENT_TOKEN_TO_BE_REPLACED

Permanent link to this article: https://www.worldwarbirdnews.com/2012/09/19/first-engine-run-for-mosquito-ra114/