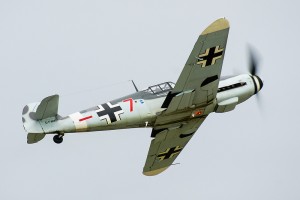 The Bf 109G-4 “Red 7” restored and flown by EADS / Messerschmitt Foundation landed wheels-up in a field after suffering an engine failure during an airshow in Roskilde, Denmark, last Sunday. The pilot is unhurt and the aircraft does not seem to have suffered heavy damage. The propeller is shattered and the engine will certainly …

END_OF_DOCUMENT_TOKEN_TO_BE_REPLACED

Permanent link to this article: https://www.worldwarbirdnews.com/2013/08/20/eadsmesserschmitt-bf-109-red-7-crash-lands-again-in-denmark/

Heinkel He 219 recovered in Denmark

The wreck of a Heinkel He 219 Uhu nightfighter was recovered off the Danish coast on Monday, April 23. The aircraft was lying under ten feet of water in the Tannis Bay. The Heinkel He 219 was solely used by the Germans in World War Two and incoporated what was then advanced technology. Although nearly …

END_OF_DOCUMENT_TOKEN_TO_BE_REPLACED

Permanent link to this article: https://www.worldwarbirdnews.com/2012/04/25/heinkel-he-219-recovered-in-denmark/