“Special Kay” made its first flight in Fort Worth, Texas on 8 July 2017 after a six-and-a-half year restoration. This aircraft was the final B-26K, a variant of the A-26 Invader improved and re-engined by On Mark for service during the Vietnam War. More info on this topic on Warbirds News.

Permanent link to this article: https://www.worldwarbirdnews.com/2017/07/13/a-26-special-kay-flies-again/ 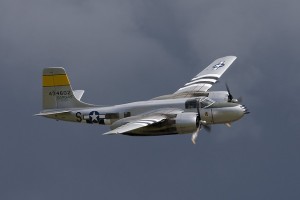 END_OF_DOCUMENT_TOKEN_TO_BE_REPLACED

Permanent link to this article: https://www.worldwarbirdnews.com/2012/11/22/combat-veteran-a-26-invader-unveiled-at-neam/

A-26 Invader to be restored in France 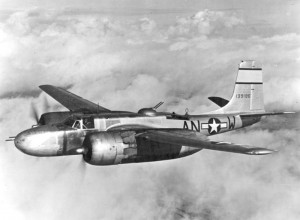 A Douglas A-26 Invader recently arrived in Avignon and should be restored. It is A-26B-45-DL s/n 44-34172, built by Douglas in Long Beach, California. Sold as surplus in 1958, the airframe was owned by several different companies and individuals.

END_OF_DOCUMENT_TOKEN_TO_BE_REPLACED

Permanent link to this article: https://www.worldwarbirdnews.com/2011/11/05/a-26-invader-to-be-restored-in-france/