From Aerodynamic Media: Warbirds of Norway’s Fieseler Fi 156 Storch Wk.Nr. 1816, built by Morane-Saulnier in Puteaux, France, flew again earlier this month in Kjeller. After serving with the French air force, the aircraft joined the civilian registry as F-BJQB until 1970, when it was exported to the US. It has been restored to be …

END_OF_DOCUMENT_TOKEN_TO_BE_REPLACED

Permanent link to this article: https://www.worldwarbirdnews.com/2017/10/25/fieseler-storch-flies-again-in-norway/ 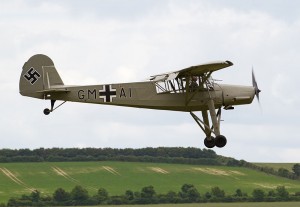 The Fieseler 156 Storch F-AZDA (ex-Morane-Saulnier 505 F-BBUG), operated by Aéro Rétro of Saint Rambert d’Albon was heavily damaged in a field landing near Chambéry, France. The pilot was slightly wounded. The aircraft was to participate in the Bourget lake airshow that is taking place today. The French Air Police has launched an investigation. Source (with photos): Le Dauphiné

Permanent link to this article: https://www.worldwarbirdnews.com/2015/08/09/fieseler-storch-damaged-in-crash-landing-in-france/