The wreckage of a lend-lease Soviet C-47 Dakota was recently discovered in Siberia, in a remarkable state of preservation. Aside from some damage due to the crash, most of the aircraft seems to be in good condition. The aircraft, a C-47-DL with c/n 9118, was turned over to the Soviet Union in February 1943 and …

END_OF_DOCUMENT_TOKEN_TO_BE_REPLACED

Permanent link to this article: https://www.worldwarbirdnews.com/2012/07/26/soviet-c-47-discovered-in-siberia/

An Il-2 Shturmovik was raised from a lake in Russia recently. The aircraft made an emergency landing on the frozen lake on November 25, 1943. The crew of two was able to leave the aircraft but it subsequently fell through the ice and sank to the bottom of the lake. According to this article from …

END_OF_DOCUMENT_TOKEN_TO_BE_REPLACED

Permanent link to this article: https://www.worldwarbirdnews.com/2012/06/24/il-2-sturmovik-raised-from-lake-in-russia/

Polikarpov I-16 Rata flies in Russia 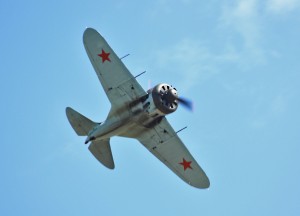 A Polikarpov I-16 (“Red 65”) flew on July 17 at Mochische airfield near Novosibirsk, Russia. Photos of the first flight are available here.

Permanent link to this article: https://www.worldwarbirdnews.com/2011/07/21/polikarpov-i-16-rata-flies-in-russia/