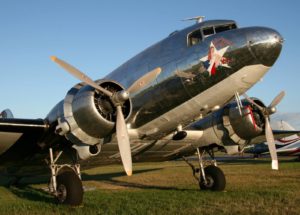 The C-47 “Blue Bonnet Belle” of the Commemorative Air Force’s Highland Lakes Squadron has been destroyed in an accident as the aircraft was departing for Oshkosh. Of the 13 people on board at the time of the crash, 7 were injured, including one with significant burn injuries who was airlifted to the hospital. The aircraft was totally …

END_OF_DOCUMENT_TOKEN_TO_BE_REPLACED

Permanent link to this article: https://www.worldwarbirdnews.com/2018/07/22/c-47-blue-bonnet-belle-destroyed-in-accident/ 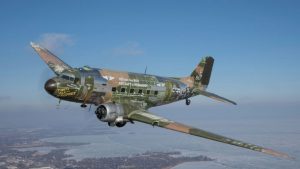 The Douglas C-47A Skytrain “That’s All, Brother”, the aircraft that led the aerial invasion of Normandy on June 6, 1944, has flown again. The aircraft, whose unique history had somewhat been forgotten, hadn’t flown in nearly a decade and was scheduled to be converted to a turboprop by Basler Turbo Conversions in Oshkosh, Wisconsin. The Commemorative …

END_OF_DOCUMENT_TOKEN_TO_BE_REPLACED

Permanent link to this article: https://www.worldwarbirdnews.com/2018/02/02/thats-all-brother-flies-again/ 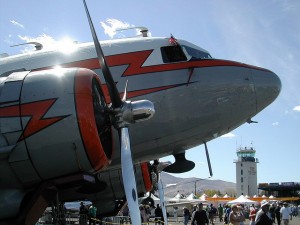 The Federal Aviation Administration has donated its last operational Douglas DC-3, registered N34, to the Texas Air & Space Museum. The aircraft, built in 1945, flew in a low level flyby and then landed at Rick Husband Amarillo International Airport where it taxied to the English Field Aviation hangar in Amarillo, Texas. Source

Permanent link to this article: https://www.worldwarbirdnews.com/2014/03/18/faa-donates-last-dc-3-to-texas-air-space-museum/

The wreckage of a lend-lease Soviet C-47 Dakota was recently discovered in Siberia, in a remarkable state of preservation. Aside from some damage due to the crash, most of the aircraft seems to be in good condition. The aircraft, a C-47-DL with c/n 9118, was turned over to the Soviet Union in February 1943 and …

END_OF_DOCUMENT_TOKEN_TO_BE_REPLACED

Permanent link to this article: https://www.worldwarbirdnews.com/2012/07/26/soviet-c-47-discovered-in-siberia/